Still a bit bulky then with its 6.2 inches diagonal, but it actually feels a bit smaller because it’s narrow – like a normal smartphone screen, minus a column of apps vertically. Samsung has increased the refresh rate up to 120Hz, the colors are vivid, the brightness excellent and the sharpness is best competitors proof. But, as for the previous versions, it is the internal display that makes the difference: 7.6 inches, 120 Hz, well defined even in bright light, perfect for working as for video games, movies, and ebooks.

Samsung has decided to include an under-screen camera. The sensor itself is not the best, only 4 megapixels, but it is a relative problem because for selfies you can use the other cameras, which are all better. This one is more than anything else designed for video calls, where it proves more than adequate. Unfortunately when not in use, the camera hole is quite visible, especially if the background is clear or there is some text.

The main camera for outdoor selfies is 10MP. On the back, there are three 12-megapixel sensors for wide-angle, ultrawide, and 2X telephoto. Compared to last year, Samsung has also introduced optical image stabilization on the telephoto lens. The quality of images and videos are quite the same, very good, of the S21 and slightly higher than the Fold2, probably thanks to the algorithm improvements. You can use the Z Fold3 on a stand or table to take photos and videos, using the top half as a preview and the bottom half for controls, however, the vertical format of the Z Flip3 makes it more practical. The operation of the night mode is very satisfactory, with realistic colors and good definition. Especially for professional creators, the Director’s View is useful, which allows you to switch from one camera to another by simply choosing the preview on the display. It also works with the Fold3 closed, but opening the extra space of the internal display certainly makes it easier to use.

With the new Z Fold3, you can use the new S Pen Pro, also compatible with the Korean manufacturer’s tablets, or the S Pen Fold, a version of the digital stylus specifically made for the Fold3. It allows you to take notes by hand, which you can then export to various text formats, and it works even if the phone is locked, for quick notes. Perfect for annotating pdfs, as well as for drawing. The only real problem is that you don’t know where to place the pen when it’s not needed. However, the Korean company has in its catalog an external cover with a special housing for the pen.

According to the Korean company, the screen is more resistant thanks to more effective protection against scratches and bumps.

The fingerprint sensor is on the power button.

The audio is very good. Not only it is in stereo and supports Dolby Atmos, but it is powerful, clear, and does not distort even at very high volumes. In the package, as it is now the practice even among high-end devices, there are no headphones or chargers.

You can insert two SIMs and simultaneously use an eSIM.

The One UI, the software that manages the Z Fold, has also been improved. Here it comes with version 3.3.1. Samsung’s multitasking system allows you to work using up to three apps together, and here the contribution of the S-Pen can be relevant. You can drag and drop icons from a side dock to arrange windows in split-screen mode or in a three-way layout.

As on the Z Flip3, the Flex Mode takes advantage of the Z Fold3’s ability to remain open at any angle to separate controls from the interface in different apps, and it works especially well with YouTube or Word or Google Docs, where you can have the text at the top and the keyboard at the bottom for comfortable typing. Thanks to the large screen it is also possible to use the desktop versions of the apps, in many cases more flexible, and if you really need an external screen, there is Samsung DeX, the software that allows you to connect Samsung smartphones to a monitor for replicating the experience of using a PC.

The performance of the Z Fold3 is excellent, on a par with the other top of the Android range, thanks to the Snapdragon 888 processor with 12GB of RAM that allows you to tackle even the most demanding multitasking without difficulty. The 4,400mAh battery, however, is not the best, even though you can reach the end of the day, with a little attention. Charging is not the fastest on the market either.

The idea behind this model of devices is to offer the experience of a tablet in the space of a smartphone. With each new generation, Samsung is getting closer and closer to the goal, and the only limits seem to lie in the aspect ratio of the display, which is almost square, and in the compatibility of the apps. In the first case, obviously, not much can be done: films and videos in 16: 9 will have large black bands above and below; for apps instead, it is worth trying to open the Advanced Features and set the view to full screen; very often the result is optimal even if the app is not optimized by the developer.

The Z Fold3 is a technological marvel, sometimes magnificent, sometimes uncomfortable, however not normal. But this time Samsung aims to make it normal, more than special. The very fact that it is finally waterproof is a sign that is designed for daily use. At the time of writing, the price of the Galaxy Z Fold3 5G with 256 GB of memory costs $1,799.99. Still quite far from normality, even for a top of the range, but judging this Samsung phone only from the point of view of performance is a mistake. For those who need a device that allows having a smartphone and a tablet in the pocket at the same time, there is nothing comparable today. Not even the Flip3, which aims at a completely different audience and type of use, and does not overlap the Fold3 in any way.

How to Paint and Shoot with Paper Artist On Galaxy Device 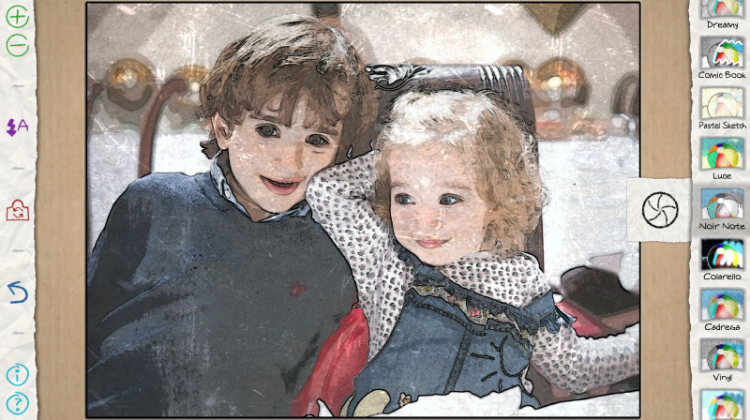