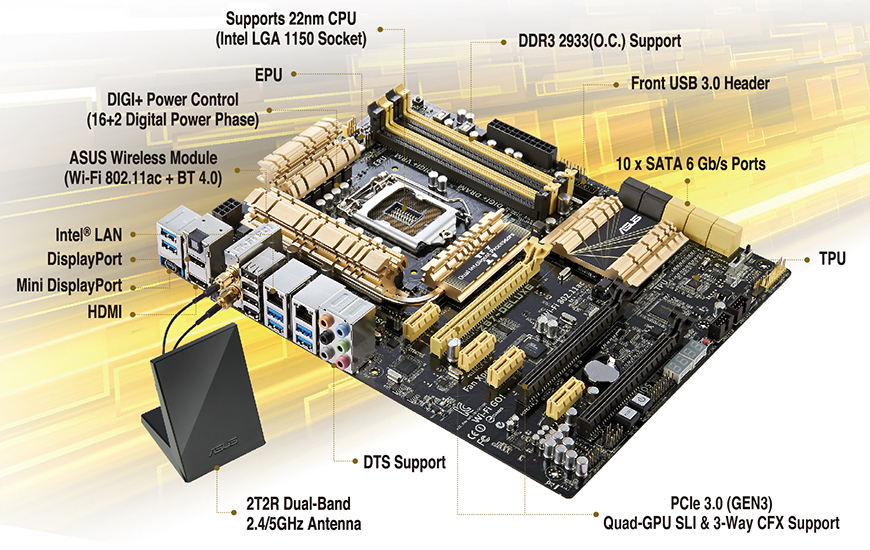 Bringing In The Gold

ASUS has entered a new direction with its latest mainstream boards, as the company welcomes a more inviting gold-black paint job to symbolize an insistence on delivering high standards for innovation. The ASUS Z87-Deluxe brings with it a shimmering color scheme and tons of features. Starting off, it comes with ASUS’ exclusive 4-Way Optimization care of its Dual Intelligent Processors 4: DIGI+ Power, TPU, Fan Xpert2, and EPU. This fully readies your PC for a better and more efficient experience with just a click of the mouse. Other notable features of this board are its Wi-Fi GO! module, more intuitive UEFI BIOS, and improved onboard components.

Moving on to the layout of the board, we have the standard LGA1150 socket that’s surrounded by gold heat sinks. It may seem too crowded at first, but even large air coolers fit with no problems. To its right are four DDR3 DIMM slots capable of supporting up to 32GB of memory.
Over to the lower half of the board are two PCIe 3.0 x16, one PCIe 2.0 x16, and four PCIe 2.0 x1 slots – plenty of space for your expansion cards and a multigraphics card setup on either SLI or CrossFire.

As for storage, you get an additional four SATA 6Gbps ports to the six from the Z87 chipset for a total of ten ports, making the dream of having a monstrous storage rig easily within reach. Also worth mentioning are the power and reset buttons, as well as the debug LEDs, that join the fray of the front panel connectors, making this board good for an open bench setup. As for its rear I/O, you have DisplayPort, HDMI, and Mini DisplayPort outputs for visual purposes.

These can support 4K monitors, but only at 24Hz. Other ports include two Ethernet ports, six USB 3.0 ports, four USB 2.0 ports, an optical S/PDIF Out, USB BIOS Flashback, six audio jacks, and antenna connectors for wireless LAN and Bluetooth. When it came to performance, the Z87-Deluxe churned out numbers that we expected. Just remember that benchmarks aren’t everything when looking into a mobo, since features and quality matter too.

The ASUS Z87-Deluxe is an overall great motherboard packed with a lot of usable features, which, by today’s standards, really do make a mark. But at the end of the day, this isn’t for everyone, as it carries a hefty price tag of PhP 16,630. If you’re planning to use this board to its full extent, its features will definitely pay for themselves in the long run.

Previous post How To Keep Tabs On Images And Film Clips